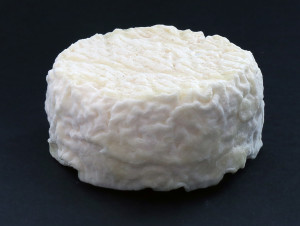 Our La Luna is the best known and most rewarded and awarded of the Holy Goat cheeses.  And who better to rely on for its successful evolution than a nun? Mother Noella Marcellino is known in cheese making circles as ‘The Cheese Nun’. But this moniker suggests more divine intervention, than the scientific rigor and intelligent persistence she has applied to cheese making research and development since the mid 1980s.

Asked to become the convent’s cheese maker at the Abbey of Regina Laudis in Bethlehem, Connecticut, Mother Noella’s first attempts were failures; most ended up fed to the pigs, until a visit from a French cheese maker who showed her the traditional way. Since then, the Cheese Nun has championed artisanal cheese making worldwide, as a microbiologist and advocate for diversity and traditional methods.

Mother Noella has been an inspiration and a guide for our cheese making and for La Luna in particular. The Cheese Nun’s special area of research (and the subject of her PhD) has been “Geotrichum candidum,” the wrinkly, velvety, white mold that encases some of France’s greatest cheeses. It is this Geotrichum that produces our signature La Luna.

Geotrichum goats milk cheeses rule in France, but here in Australia (and in the US and UK) they are not the norm.  More Australian specialist cheese makers are now starting to produce Geotrichum cheese, but it’s still considered a minority cheese.

We first started researching and trialing with Geotrichum in 2002. It wasn’t until 2005 that we started making good cheese.

One of the features of Geotrichum is the diversity of strains that exist.  Mother Noella found that in France, Geotrichum strains are regionally specific – particular areas grow specific Geotrichum strains and hence their cheeses are absolutely unique to that area. The differences, even at an individual farm level, were quite astounding. From 180 samples of milk, curd and cheese, 64 different ‘Geo’ strains were isolated. Tightly held (secret!) family cheese making traditions, maintained over centuries, have nurtured diversity and created iconic cheeses, like the Normandy Camembert, St. Nectaire and Reblochon.

The Cheese Nun found that within the Geotrichum genus, there are three different forms or morphologies: “strains with yeast-like colonies that produce abundant arthrospores and have generally low proteolytic activity, strains whose colonies are white and resemble filamentous fungi with a predominance of hyphae and high proteolytic activity, and those that fall in between”.

These three forms give rise to many different strains, all a reflection of their environment, all imparting a different characteristic and taste to the cheese, and as far from processed industrial cheese as you can get. 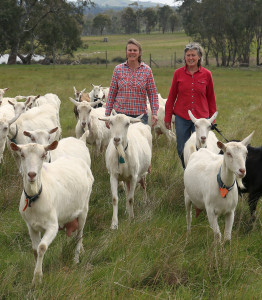 Like Mother Noella’s research (published in 2001), Swinburne University also looked at isolating Geotrichum strains in some recent research. Surprisingly, ours was very different, with a unique ‘signature’, to the other French Geotrichum goats milk cheeses. It sat on a completely separate ‘DNA branch’ when mapped. Our Sutton Grange strain is a yeasty form.

So in the same way as the French, we have developed a very unique and characteristic ‘terroir’ in our La Luna. It’s a combination of factors – the pastures, native bush and vegetation, water, feed, soils, and the goats themselves that make our microbes – and therefore our cheeses – unique.

Working with Geotrichum involves intricacies and challenge. The organism can be very competitive and will quickly change the microbial dynamics of the cheese room.  A visiting Swedish cheese maker was quite averse to our Geotrichum, saying that in her farm house cheeses they would not develop this rind, they especially didn’t want to have the yeasty form we have, because it would compete against – and predominate over – the white molds that they produce camembert’s and other soft cheeses.

This is true. The La Luna Geotrichum dominates in our cheese room. But we are able to manage all various microbes at work there, so that the Geo only grows where it is wanted. (Though we do sometimes wonder if someone was to fall asleep in the cheese room whether they would wake the next morning with La Luna transforming every moist cranny! We also wonder whether our increasing wrinkles are actually the effects of La Luna, and not aging…)

We strongly believe it is worth the extra diligence and attention to cultivate Geotrichum cheeses. The flavour profile of this remarkable cheese is like no other.

La Luna starts life in the same way as our other lactic acid fermentation cheeses. After the milk is drawn from the goats, it is pasteurised at 63 degrees C for 30 minutes, then it is chilled to 26 degrees C and the starter cultures are added. Curds begin to form slowly over a period of about 20 hours at 20 degrees. We then hand ladle, very carefully, into moulds. The molds are left to drain all day, turned the next night and then the curd is turned out of the mold the following morning, and salted. We reduce the temperature to 14 degrees C. The young cheeses are turned daily until the rind is well formed and the cheese matured. We find that the cheese grows its rind within 24 to 48 hours after ladling the curd into molds.

The ‘Geo’ transforms the whole cheese. At ladling, the curds have a pH of 4.4 (the same as yoghurt) but as the cheese ripens, the Geotrichum activity causes the pH of the cheese to rise to 4.95. This markedly changes the taste and qualities of the cheese, creating a complex, yeasty, lemony flavour.

Salt balance is a critical part of making cheese. By using salt we are making cheese safe – preserving it – as well as helping to balance and intensify its flavours. Salt is nature’s preservative. When you eat ‘low salt’ or ‘no salt’ cheese, odds on you will also be eating other not-so-natural preservatives, which are added to mimic the role of salt.

From milking, to having La Luna cheese on sale at a farmers market or local providore or regional outlet takes between 10 days and three weeks, depending on the size of the cheese and the maturity sought.

We expect most people will eat their La Luna in one sitting. There’s no better way than serving up a small circle of la luna, cut it into segments like a cake and eating as-is, or just with bread. Cheese is a complete food. The simpler the better. Ensure that you smell the cheese before you taste it (will enhance the taste hit) and warm it slightly in your mouth to let the flavours infiltrate. Take the time to eat and savour it, from the rind to the paste.

If you do need to store your La Luna here are a few tips. Our cheese is a living being and needs to be able to breathe. Our packaging wrap has perforations to allow this. La Luna also requires some humidity. The domestic frig is a very low humidity and drying environment – disastrous, even fatal, for unwrapped or poorly stored cheese. The best method is to leave in its original wrap, in the frig (or place in a plastic container, still wrapped, if you find the smell too strong).

Fresh cheese is best eaten fresh, not stored, so buy the size that suits your needs (hold your mouse over the image to see the size and type):