The 2016 delicious. Produce Awards were held this week at the Pier One Sydney Harbour Hotel. We couldn’t make it to the affair, attended each year by the who’s who of small, sustainable production, and those who support, sell and cook with their produce.

Sally Gosper and the team from our Sydney-based distributor, Simon Johnson attended on our behalf and were just as thrilled as we were to pick up two ‘gongs’ – one for our Brigids Well cheese and another for our farm, awarded “Producer of the Year”.

We are really proud and honoured that our cheese, our goats, and our farming systems are continuing to be recognised and lauded by the industry. We are also proud to represent small, sustainable and biodiverse producers that keep focused on their farms and production. We don’t believe the statement you need to work on your business not in it! Farming is a vocation. The daily presence of us with our team, goats and cheese room means we grow, change, develop and move with the needs of the goats, and the cheese.

Nominations for the 2016 delicious. Produce Awards were, for the first time, opened exclusively to industry experts, and this year we received more new and exciting entries than ever before. Innovation was a big factor that set good produce apart from exceptional produce. I would like to congratulate all of our winners and gold medallists and make special mention of Melbourne producers Carla and Ann-Marie, who show no sign of slowing down and whose Holy Goat Cheese is the absolute pinnacle of Australian produce.”

The produce awards have been going for 11 years and we have been nominated in a fair few of them. Nominations are made by experts in the food industry (it’s a bit like the produce equivalent of the Academy Awards!) so we feel chuffed that leaders in the food industry continue to acknowledge our cheeses, and our cheese production.   The national judging panel this year was Matt Moran, Andew McConnell, Peter Gilmore, Alla Wolf-Tasker, Maggie Beer, Guillaume Brahimi, Christine Manfield and Shannon Bennett.

“I was once again lucky enough to be a part of the National Judging Panel for the delicious. Produce Awards. Every year I am so excited by the quality of produce. This year I tasted some of the best seafood, organic vegies and cheese I have ever tasted. As a chef, it is a really exciting time for the Australian food industry and so much of that comes down to the quality and accessibility of our produce.”

Matt Moran, host of the Awards 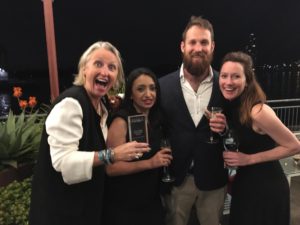 Sally Gosper and the Simon Johnson team with Holy a Goat producer of the Year Award. The fabulous team at Holy Goat are very honoured to receive this award.

The full list of winners and gold medallists appears in the October issue of delicious. and on delicious.com.au.

And on the topic of small, sustainable production, you might like watching Ann-Marie talk about why farmers markets are so important to Holy Goat Cheese.